You’ve certainly heard about San Onofre’s shutdown and the reactivation of the Newland Huntington Beach facility. Much like you, I’m wondering what all that might mean to us as the temperature heats up. Applying simple logic and a measure of safety to protect your business is just plain smart. We can be of assistance here! 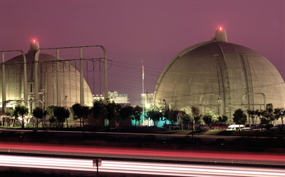 We fully understand that San Onofre’s Nuclear Generating Station capacity serves 1.2 million customers in San Diego and Southern Orange County. I first thought that taking SONGS off-line might affect us, but then, I am reminded that we’re all on one big power grid. After all, how could we forget when we were all down last year when someone in Arizona flipped the wrong switch? Now, this reminds me of how human and how delicate things really are; so, here is my take on the consequences.

If there is not enough power to server the grid, then some things start to kick in, like where the thermostats that are remotely controlled by the power companies, followed by rolling residential (we hope)  blackouts during peak usage hours. This is supposed to help alleviate the load a bit. But what if it’s not enough? Now you have to think through this one.

At the end of the day, if you don’t have power, it’s pretty hard to conduct business. But mitigating extenuating circumstances that can result from a power glitch or shutdown is very important. What I am talking about here is a server, computers or other equipment going down hard – and not coming up!  If it’s a server, that’s going to be expensive. This could easily be your worst nightmare realized!

When Power is Out

Understand the items that do stay up or work when power is out. Laptops have their own battery so that is always a winner, but unless your network is on a battery backup, you may just have to either work locally or ‘tether’ to a  3G or 4G device, like a Smartphone or Tablet. Heck, even auto manufacturers like Audi are turning cars into hot spots so don’t forget this option! Having a couple devices set up with a ‘tether’ before an outage makes sense as scrambling when power is down puts you in line with everyone else. Cell phones and Smartphones will be up as long as you battery will carry you.  Single line telephone lines like a fax or alarm will be up, but unless your phone system is on battery backup, it will go down as well. Do remember that you likely don’t need a very large or expensive UPS (battery backup) to keep a phone system powered and the lines themselves are backed up by the phone company as that is mandated as it is considered a lifeline service. In short, the phone lines don’t go down, but the items connected to it are usually do, creating phone downtime.

When Power comes back on

When power is out, you’ll want to unplug sensitive and expensive devices, like copiers. This is beneficial because when power has been restored, for a few minutes the power fluctuatates from so much equipment coming up at one time. This places an excessive load on the grid and may under or overcompensate, creating surges or worse yet, low voltage conditions. These two types of events cause the most damage. We recommend that you wait for power to have been restored for about ten minutes before starting to turn items to ensure that the power will stay up .

How to Mitigate your Risk

Here’s hindsight in a nutshell. Your computers and printers should have surge protectors at the minimum. If there are very critical computers, spend the $60 and get them a UPS. Servers should have a battery backup that has shutdown intelligence. This means that when the battery begins to be depleted, say 25% remaining, it should be able to tell the server to shut down as it does not know if it will be able to sustain the server until the power returns. It is far better to shut servers down in an orderly manner, and simply have to reboot them when the power has been restored, then to have to call us in and perform a rebuild at significant cost; not to mention the impact of being down for an undefined amount of time on your business .

If you’re not sure how well protected you are, or want to confirm your belief that you are protected, give us a call.

We’ve been down this road before, so you don’t have to!